An amazing natural attraction - a growing rock - can be found in eastern Bavaria, in the village of Usterling. It's more like a wall than a rock, because it looks like a wall. The wall has an elongated shape with curves, and its top is almost as thick as the foot. On the slope above this natural monument there is a spring from which the water flows through a narrow gutter hidden in the moss at the top of the rock. The name says it: the rock is constantly growing, by 2-3 cm every year. The reason is the calcium-rich water, from which sediments are very slowly deposited at the bottom of the grooves through which the water flows. The rock has been gradually forming for thousands of years, according to some estimates, it’s 5000 years old. The rock reaches 5.4 meters in height, 37 meters in length, and is the largest rock formation of its kind in Germany. The largest fissure ridges in the world reach up to 15 m in height and over 500 m in length! However, in most cases, the fissure ridges are nothing but small elongated formations of lime tuff with a narrow groove at the top. Sooner or later, the water stream disappears or deviates for various reasons, the tuff dries up and becomes overgrown by vegetation, and gradually changes beyond recognition.


Sometimes people can help nature in creating its miracles, and the growing rock in Usterling is a vivid example. People have noticed this unusual natural formation long ago. In the local church you can see a late Gothic painted relief dated 1520, which depicts the baptism (according to the local legend) of Jesus by John the Baptist with water flowing down this unique cliff. Thanks to this, the locals call it the rock of Saint John (Johannisfelsen). The chapel next to the rock is also named after St. John. 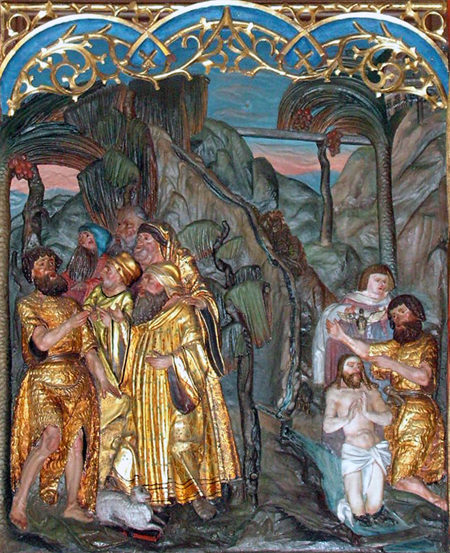 Some people believe that the water of this spring can heal the eyes. The faith made this place a well-known pilgrimage site. Now people come here on June 24, St. John's Day. The local clergy have been taking care of the rock for centuries, cleansing it of grass, soil and shrubs. In winter, water was drained so as not to damage the gutter with ice. The growing rock has been a natural monument since 1937, and is now being cared for by local authorities. We can be sure that this amazing sight has grown to its true size only thanks to this care.